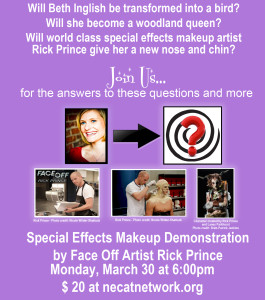 The interactive demonstration by Prince, who is also NECAT’s Artist-in-Residence, will last approximately two hours and guests are encouraged to ask questions throughout the process and have their picture made with the whimsical fantasy creature Rick creates as he transforms Engagement Editor Beth Inglish from The Tennessean.

A contestant of Season 5 of Face Off, a special effects makeup competition show on the Syfy channel, Prince is professionally most well known for his zombies and dark horror creations, like the green warrior he made of Nashville Scene Theater Critic Martin Brady during NECAT’s Special Effects DEMONstration at Halloween. For spring, however, we present a lighter, more beautiful form of creature makeup known in the industry as “whimsy,” as Rick transforms The Tennessean’s own Beth Inglish into a magical creature.

Registration for the interactive demonstration is $20 via the Payments Page or by calling (615) 354-1273. All ages welcome.

This makeup demonstration is part of a whole new roster of class offerings to the public at NECAT, including our new Special Effects Makeup and Prosthetics Classes, open to all levels from beginner and up, age 13 to 113. For a full schedule of TV and Special Effects classes, camps, and Face Off competitions, visit necatnetwork.org or call (615) 354-1273.

And as always, everyone age 13 and up is invited to learn TV production and make their own TV shows at NECAT, which we will broadcast throughout middle Tennessee on our public arts, public education, and public access TV channels, respectively found on Comcast channels 9, 10, and 19 in Davidson County, AT&T U-verse channel 99 throughout middle Tennessee, and livestreamed at necatnetwork.org.